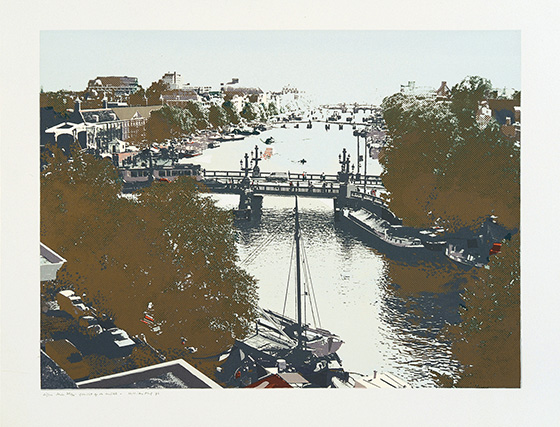 This edition is sold out.

JM: Is it because a panoramic landscape would necessar­ily involve more of the traditional landscape painting and that would have something of the genre you want to keep a distance to, you do not want to make Vedutes or Views Of?

MP: Oh no. That is, I once made a real vedute in screen print and it was called View Of The Amstel and the whole edition was sold out very soon, haha, it had golden trees – bronze, actually.
It was based on a photograph taken from the roof of the former house of Cas Oorthuys, the photographer, just before it was demolished to make place for the Opera, in Amsterdam. But I did not do it on purpose I think. It was a mere coincidence and anyhow the title was given afterwards. And then some of my smaller paintings are panoramic but that is because they are painted outside.